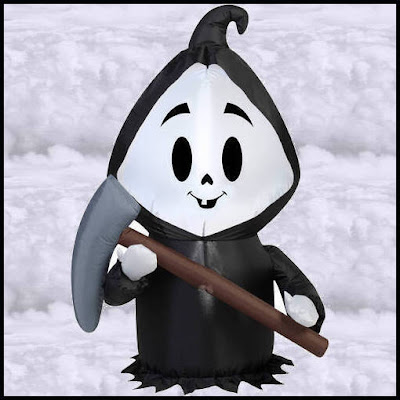 Cyrus McCormick, who invented the reaper and founded the company that became International Harvester, was a generous contributor to Chicago’s Presbyterian Theological School. Because of that fact, the school later changed its name to McCormick Theological Seminary. Faculty and students have quipped that death is never referred to as “The Grim Reaper” at McCormick, but always as “The International Harvester.”

“Grim” is not a word which describes the experience of many people who find themselves nearing life’s end. Like Dr. Abraham Maslow commented after a heart attack which made him realize that his own death was not far away: “Death, and its ever-present possibility makes love, passionate love, more possible.  I wonder if we could love passionately, if ecstasy would be possible at all, if we knew we’d never die.”

Likewise, psychiatrist Irvin Yalom, who worked with terminally ill cancer patients, reported that “grimness” was far from their attitudes about passing on. Yalom tells us that once his patients accepted the fact that their lives were rapidly drawing to an end, positive and exciting changes occurred. He reports that they felt a sense of freedom to do what they wanted to do. Furthermore, they lived in the present and enjoyed it more. They found themselves appreciating the world around them in ways they never had before. They communicated more deeply with loved ones and actually looked forward to holidays in joyous anticipation.

Because these people knew they were dying, they figured out how to live. Nothing grim here. They came alive in ways never before possible. Like one dying woman said to me, “Life sparkles.”

Oh, maybe you don’t want to volunteer to hop on that bus today, but we’ll each set off on the journey soon enough. And from what I can tell, it promises to be an exciting adventure. But in the meantime, what if you set out to start living now as if your short days here were truly numbered? When “The International Harvester” knocks on your door, may it be opened by somebody who didn’t wait until it was time to die to learn how to live.

To know more about Chief Dr Lucky you can visit his website (https://chiefdrluckyherbaltherapy.wordpress.com/)

A friend that suffered from Herpes and was cure with the help of this great herbal doctor Chief Lucky so i decided to contact him for help in getting rid of my families genital herpes virus 1/2 which i did and all i was told to provide was just some useful information and some materials used in preparation of the natural cure and that i did and now i am the happiest person on earth because i am writing this testimony of mine with joy and happiness in my heart to the whole world to know that natural remedy is real because i am a living testimony of Chief Lucky traditional herbal cure and i want you all to contact Chief Lucky via his email: chiefdrlucky@gmail.com or WhatsApp him +2348132777335 am sure he will help you too.