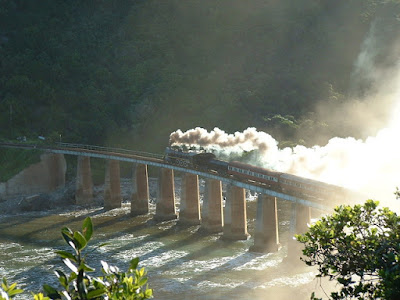 One man, too inebriated to drive, was walking home along railroad tracks when his foot suddenly became stuck. He pulled and tugged, but could not free it from the tracks.


Then he heard a noise and turned around to see an oncoming train. In a panic, he prayed. "Dear God, please get my foot out of these tracks and I'll stop drinking."
Nothing happened.

With the speeding train closer, he tried again. "Oh, Lord, get my foot out of these tracks and I'll stop drinking AND I'll quit cheating on my wife!"

Does that kind of prayer sound familiar? How often are prayers, even when one is not in a state of emergency, concerned only about physical needs -- health and safety?

Mahatma Gandhi claimed to have never made even a minor decision without prayer. Gandhi was known best as an Indian nationalist and spiritual leader, but he was also a man of rare courage. He developed the practice of nonviolent disobedience that eventually forced Great Britain to grant India's independence.


He spoke often about spirituality and prayer. He told about traveling to South Africa to oppose a law there directed expressly against Indians. His ship was met by a hostile mob and he was advised to stay on board. They had come, he was told, with the express intention of lynching him. Gandhi said of the incident: "I went ashore nevertheless. I was stoned and kicked and beaten a good deal; but I had not prayed for safety, but for the courage to face the mob, and that courage came and did not fail me."
Gandhi preferred courage over safety. If accomplishing his goals put him in the way of danger, then he wanted to face that danger bravely. His prayer was to receive enough courage to do what needed to be done, not to live his life free from harm.

Rabbi Harold Kushner speaks about such prayer. He reminds us that "people who pray for courage, for strength to bear the unbearable, for the grace to remember what they have left instead of what they have lost, very often find their prayers answered. Their prayers helped them tap hidden reserves of faith and courage that were not available to them before."

Like you, I know what it is to be afraid. I'm afraid of accidental injury, dismemberment or death. I've been afraid of a pending medical diagnosis. There must be a million different faces to the fears of life.

I'm tempted at these times to hope for, and pray for, a way to avoid the danger ahead. I want to be safe, secure and healthy. But none of us is always safe, secure or healthy. So, I, too, have come to see that the better prayer is for courage to face whatever life may bring. And in some place deep inside me, I am not only convinced that the courage will come and not fail me, but that it will be enough. Always enough.

freeimages.com/Fokko Veenstra
Posted by Steve Goodier at 10:39 AM

What a wonderful post, Mr. Goodier. "Always enough". It's good to be reminded that how we phrase the question is often the precursor to the answer. And so it is with prayer. The right prayer is "always enough". Thank you for that insight.